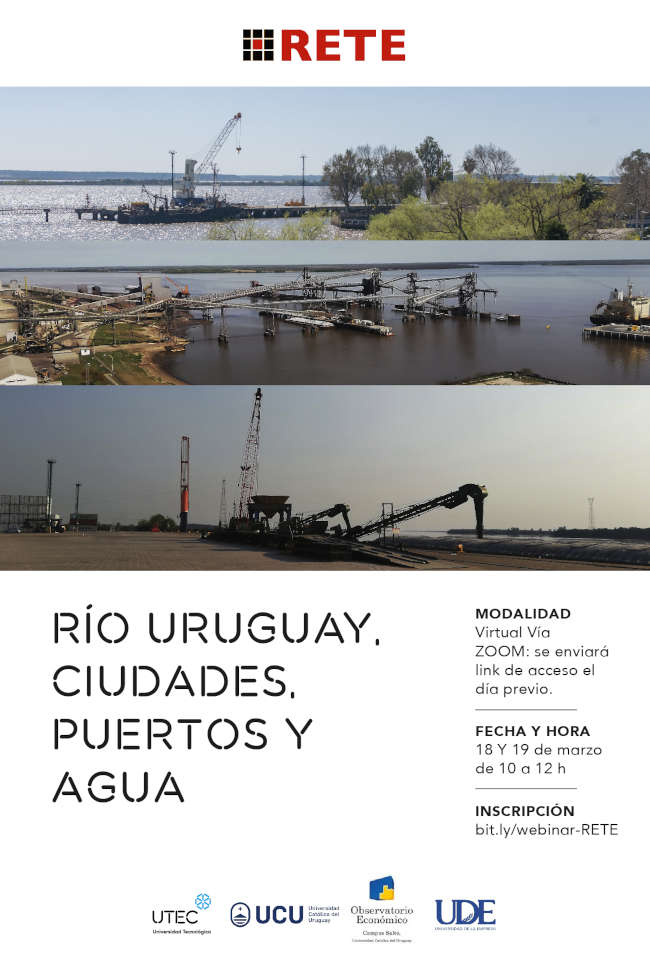 On March 18th-19th, from 10 a.m.to 12 p.m.  UY (GMT -3), the webinar “Uruguay River, Cities, Ports and Waters”, will take place. The event is organised by RETE in collaboration with the Catholic University of Uruguay (UCU), the Technological University (UTEC), the Economic Observatory Campus Saltus of the UCU and the University of Enterprise (UDE).

The discussion will focus on the Uruguay River, which has historically been one of the axes of development in Argentina, but particularly the axis of river development in Uruguay, which is practically the only navigable active waterway.

The history of the river, which also runs through Brazil, is rich. The country’s first shipbuilding industries was developed in Salto and the world’s first meat extract factory was set up in Fray Bentos. Dr. Oetker, owner of Hamburg Süd, recently passed away, developed the brewing industry in Paysandú. For many years, there was a smooth flow of traffic along the river, including passenger traffic from Salto to Buenos Aires. The Salto Chico and Salto Grande prevented continuous navigation northwards. The design of the dam of Salto Grande foresaw the construction of a lock, whose lower channel was never completed.

For years the river ceased to be used, but the link between coast cities and water was maintained in all its forms. The effects of climate change, the algal formations in recent years, progress on drinking water and sanitation, the growing awareness of citizens, the development of water culture and finally the resumption of navigation on the river with the increase of dredging and the booming development of Nueva Palmira make a holistic reflection on cities, ports and water necessary. Indeed, the great potential for development of the Uruguay River can be seized only if these three elements are considered as parts of an integrated system. Care for the environmental and cultural aspects is the basis for their sustainability.

On Thursday 18th March, the debate will be opened by Luis Heber, Ministry of Transport and Public Works. His intervention will be followed by Carola Hein, Professor of History of Architecture and Urbanism at TU-Delft University, member of RETE Scientific Committee and Director of the magazine PORTUSplus. A careful analysis of the impacts of climate change on the cities of the Uruguay River will be shared by Myrna Campoleoni, United Nations Development Programme. Perspectives on navigation and water management will be the topics of the interventions by Sergio Gorriarán, the Uruguayan Corporation of Maritime Pilots of the Río Uruguay, the Río de la Plata and the Oceanic Maritime Littoral, and Alida Alves, Wageningen University & Research. Conclusions will be developed by Fernando Puntigliano, Professor of Logistics at UCU, member of RETE Scientific Committee and Governing Board.

The second and last day will be moderated by Liliana Peirana (no affiliation) and will see the participation of representatives of the port system: Néstor Fernández, Ports National System; José Luis Elizondo, National Naval Prefect Rear Admiral and Alberto Díaz (no affiliation). The meeting will be closed by Juan Curbelo, National Port Administration.

For registration: bit.ly/webinar-RETE. Access link will be sent the day before.

The event will be streamed from 10 a.m. to 12 p.m. h UY (GMT -3) on the YouTube channel of the Technological University’s YouTube channel on Thursday 18th March (bit.ly/YouTubeUtec) and of the Catholic University of Uruguay (bit.ly/MediatecaUCU) on Friday 19th.