The Spanish Port of Ceuta, new member of RET, expresses its commitment to port-city integration

The Spanish Port of Ceuta, new member of RET, expresses its commitment to port-city integration

The Port Authority of Ceuta is a new member of RETE, Association for collaboration between ports and cities, joining this international organization that promotes synergies of institutions to increase opportunities generated by the urban and social integration of port areas.

The Port of this Autonomous joins this network that works on the promotion, configuration and evolution of the economic, social, cultural and political map of cities with maritime or fluvial port environments.

Ceuta stands out for its privileged geographical location in the Strait of Gibraltar, in North Africa. It has tax advantages and its port has its focus of activity on passenger traffic, goods and provisioning to ships. Its facilities, fully integrated into the urban fabric, form an important source of its local economy.

The signing of the integration agreement has been signed by its president, Juan Manuel Doncel, and the president of RETE, Teófila Martínez, who has welcomed the new partner recognizing his commitment to port and city integration. 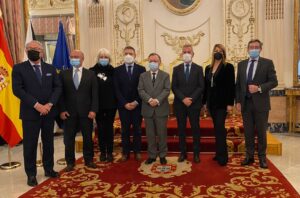