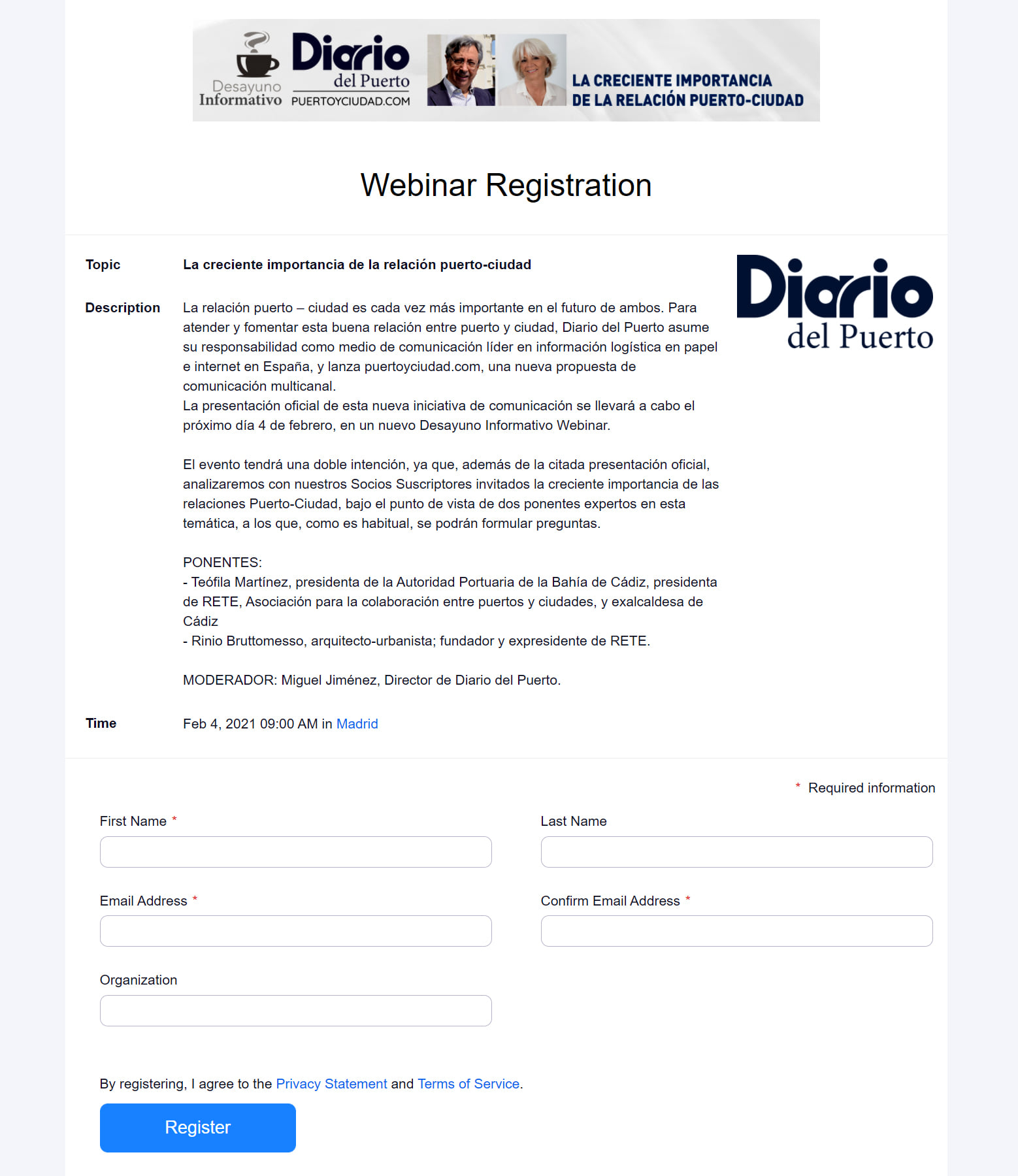 Teófila Martínez, president of the Port Authority of the Bay of Cadiz and president of RETE, and Rinio Bruttomesso, urban architect, founder and former president of RETE, starred in the Webinar Grupo Diario-Diario del Puerto, under the title “The growing importance of the port-city relationship”.

The objective of the event was two-fold: on the one hand, officially presenting the company’s new multichannel communication product of Puerto Ciudad; and, on the other hand, analyzing with its subscriber partners the growing importance of port-city relations, from the point of view of the two speakers.

The webinar started with the words of Fernando Vitoria, general manager of Grupo Diario Editorial, who highlighted “Today it is time to talk about Port and City, and we, the logistics and port companies, are going to do it. It seems that everyone is talking about this issue except the ports and the professionals who give life to it. It must be solved”.

Teófila Martínez, who served as mayor of Cádiz for 20 years, could offer an analysis from the two key points of view of this relationship. In her opinion, the Port and the City have been seen as agents on either side of the fence for centuries. This situation is changing but it is not going as fast as it should. “The problem is that both were convinced that the relationship was impossible and ports felt like losers. What is clear is that we have a great opportunity ahead of us that we must know how to take advantage of,” said the president of RETE.

The Port, as a subject, is an economic agent of first order, “so the integration process must include knowing that ports generate wealth, that they boost the economy of the surrounding area and improve the available resources by working to be more sustainable. The Port is a link in the supply chain of the territory and favors each and every one of the surrounding companies. Therefore, their needs must be known”.

At the same time, Teófila Martínez  reminded that “the port must take into account the nearest territory” and that the integration process “does not mean losing port space, the activity is moved and not lost”. “It is important to find the balance to meet the needs of the city and the logistics and port needs,” she added.

For all these reasons, she stated that the objectives must be to ” consolidate the port vocation of the cities through the physical integration of the land and social and cultural integration thus establishing lasting and real relationships”. In addition, Martinez highlighted the importance of “reactivating the port industrial land and disused buildings to start up activities that attract new companies, promote entrepreneurship, innovative and sustainable development also through the use of new technologies.”

For his part, Rinio Bruttomesso emphasized that since 1980, when the first waterfronts were developed, until today, there has been a remarkable transformation. “There is a need to recover the bond of coexistence with the city. And to do so, – three words that he recovered from the interview of Francisco Toledo, president of Puertos del Estado – “dialogue, respect and trust are needed to consolidate an authentic and true port-city relationship”. For the expert, “we have to strengthen confrontation tables (at local, national and international level) that activate the construction of the port-city”.

Bruttomesso spoke of three levels of action. A first physical level, the waterfront: “the territory is full of opportunities, but it is also very delicate So we have to generate opportunities but bearing in mind that conflicts can arise and we have to know how to solve them”. A second institutional level: “The dialogue must go beyond the institutions. The issue is to have an important participation of citizens, associations, universities and research centers. We have to build tables that are not two-legged port and city, but three or four, with citizens and port community.

And a third level of project: “We have to think about what the future will be. We have to solve today’s problem but thinking about tomorrow. That is where we have to share solutions, we have to work together!