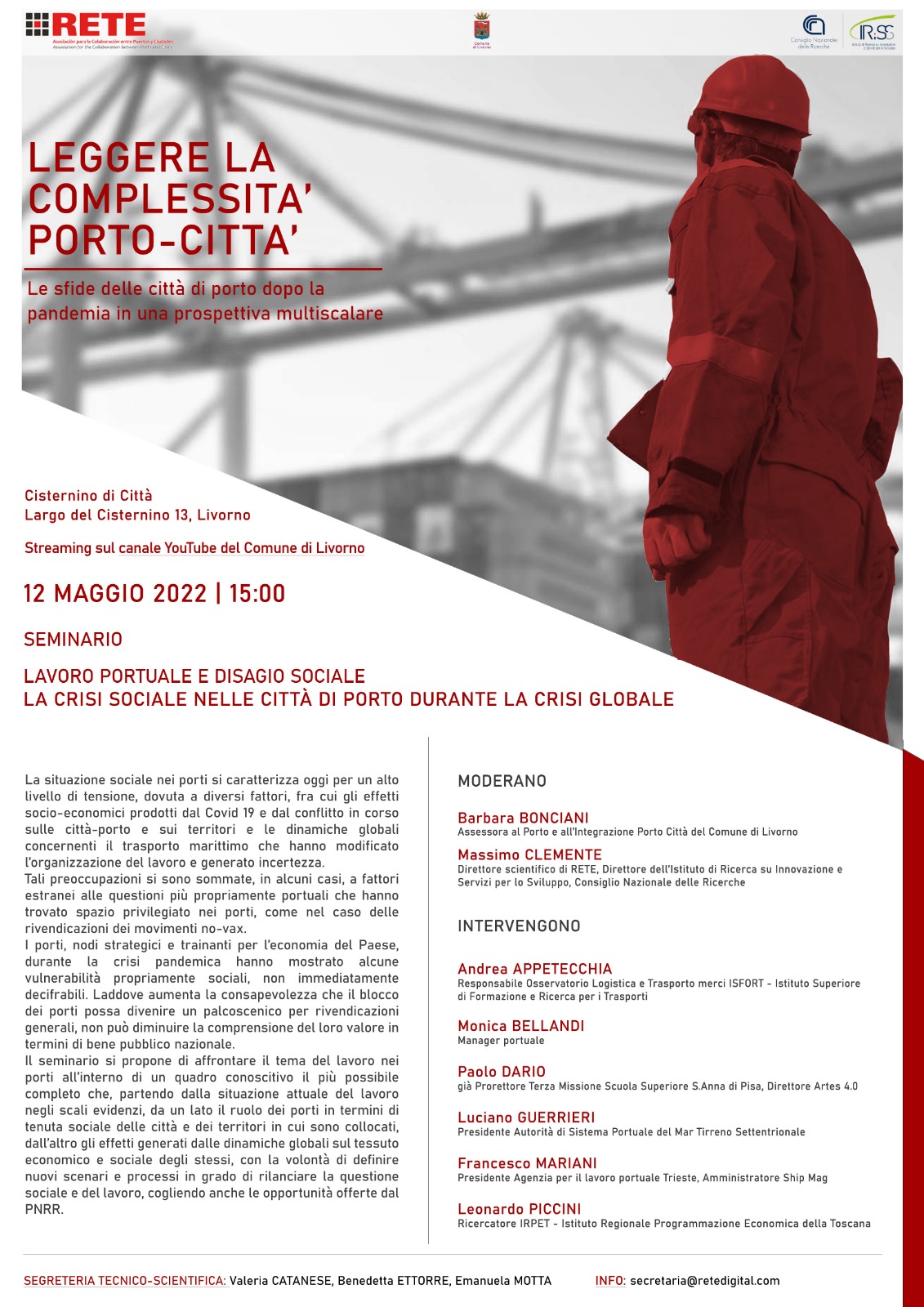 On Thursday 12 May, starting at 3 p.m.  CET, the seminar “The social crisis in port cities after the global crisis” will take place in Livorno at the Cisternino di Città, organised by RETE – International Association for the Collaboration between Ports and Cities, together with the Municipality of Livorno and the Institute for Research on Innovation and Services for Development of the National Research Council of Italy (Cnr-Iriss).

Third appointment of the webinar cycle “Reading the complexity Port-City | The challenges of port cities after the pandemic in a multiscalar perspective”, this seminar, broadcasted in streaming on the YouTube channel of the Municipality of Livorno (http://www.bit. ly/3bqGyaD), will focus on the situation of strong social tension that Italian ports are experiencing today, due to various factors including, on the one hand, the socio-economic effects produced by Covid 19 and the Russian-Ukrainian conflict on port cities and territories, and on the other hand, the global dynamics concerning maritime transport (naval gigantism, oligopoly and vertical integration of port terminalism) which have changed the organisation of work and generated uncertainty. These concerns have, in some contexts, been compounded by other factors, unrelated to port issues, but which have found a privileged space for expression in ports, as in the case of the claims of the no-vax movements.

Ports, which act as strategic and driving factors for the country’s economy, during the pandemic crisis have shown vulnerabilities of social interest that have not been immediately understood and interpreted.

In this context, the seminar proposes to address the theme of “social issue” and work in ports and port cities within a framework of knowledge as complete as possible. Starting from the current situation of work in ports, the initiative intends to highlight, on the one hand, the role of ports in terms of social stability of the cities and territories in which they are located and, on the other one, the effects generated by the global dynamics on the economic and social fabric of the ports themselves.

The debate will be moderated by Barbara Bonciani, Councillor for Port and Port-City Integration of the Municipality of Livorno, member of the Government Council and of the Scientific Committee of RETE, and Massimo Clemente, Director of CNR-IRISS and Scientific Director of RETE.

The day will continue at Sala Ferretti – Fortezza Vecchia where, at 6.30 p.m. CET, as part of the initiative promoted by the Propeller Club Port of Leghorn, will be presented the volume “Dialogues between port and city in the era of globalization – For a multidisciplinary approach to port challenges”, edited by Barbara Bonciani, Eleonora Giovene di Girasole and Luisa Bordato.

Video webinar “The geoeconomic, social and legal challenges of port cities after the pandemic”: https://www.youtube.com/watch?v=u_-sZRnvO6U