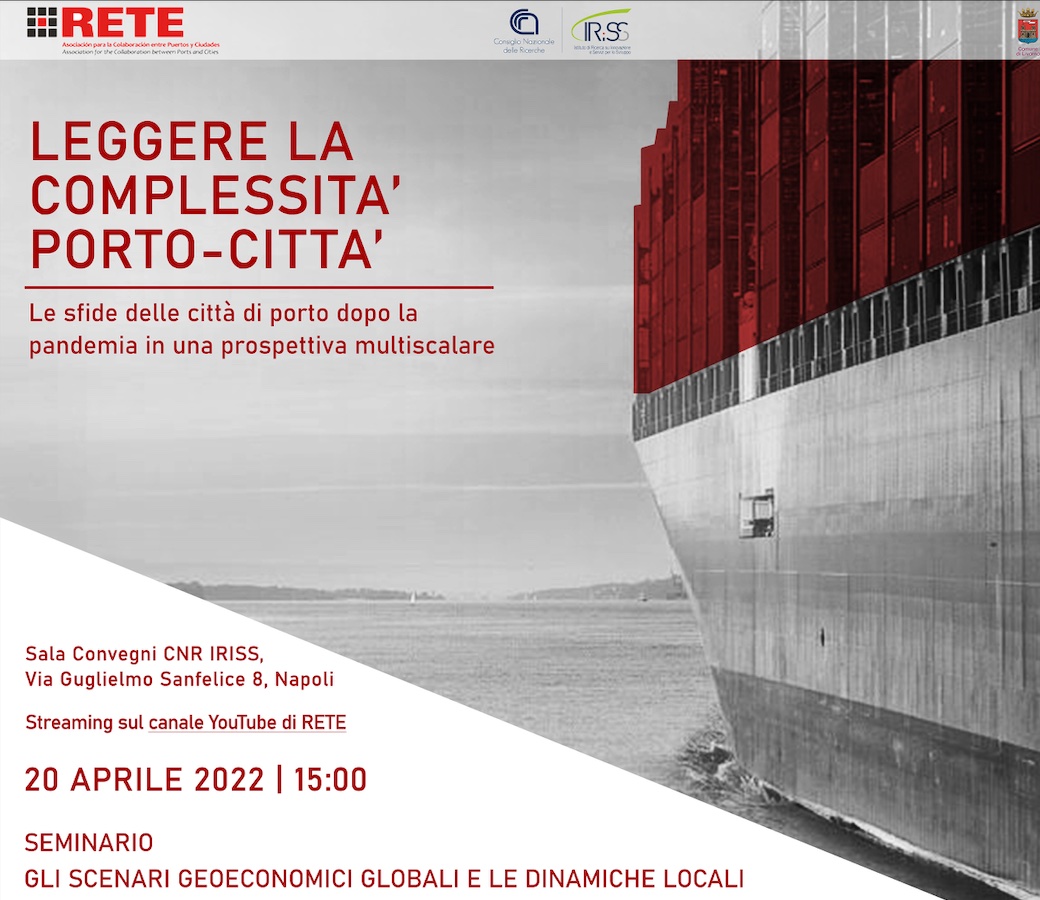 On Wednesday April 20, from 3.00 p.m. to 5.30 p.m CET, the seminar “Global geo-economic scenarios and local dynamics” will be held at the Research Institute on Innovation and Development Services in Naples.  This initiative falls within the webinars cycle “Reading Port City complexity | The challenges of port cities after the pandemic in a multiscalar perspective”.

Organised by RETE – International Association for the Collaboration between Ports and Cities, together with CNR IRISS and the Municipality of Livorno, the seminar aims to promote, through an exchange of knowledge and visions between the scientific community, businesses, associations and institutions, a structured dialogue to foster the resolution of the conflicts that characterize port cities in the post-covid scenario.

The pandemic has highlighted the distorting effects produced on the market by the oligopoly: phenomena such as the blank sailing, the dizzying increase in sea freight rates, the lack of empty containers etc. are the obvious and tangible signs of this phenomenon. The impact of the pandemic on international trade has been relevant, with a significant increase in the demand for products from China, which has not been accompanied by a recovery in imports from the Asian country of the same tenor. The resulting shortage of containers for export to the rest of the world led to an exponential increase in container freight prices, which became unsustainable for European and US importers. In a time of global economic crisis, the oligopoly has favoured advantages for only one party.

In this complex scenario, local dynamics and, specifically, the challenge of port cities’regeneration take on renewed significance. Starting from a renewed “green blue” culture, new urban visions can be built, oriented towards the well-being of the city-port-territory-community system.

After the institutional greetings by Andrea Annunziata, President of the Central Tyrrhenian Sea Port Authority, and Edoardo Cosenza, Councillor for Infrastructure, Mobility and Civil Protection of the Municipality of Naples, the debate will begin, moderated by Massimo Clemente, Director of CNR-IRISS and Scientific Director of RETE, and Barbara Bonciani, Councillor for the port and port-city integration of the Municipality of Livorno, member of both the Management Board and the Scientific Committee of RETE.

To attend the event in person, it is necessary to register by sending an email to registration.event@iriss.cnr.it, to be in possession of a green pass and to wear an FFP2 mask.

The seminar will also be streamed on RETE’s YouTube channel