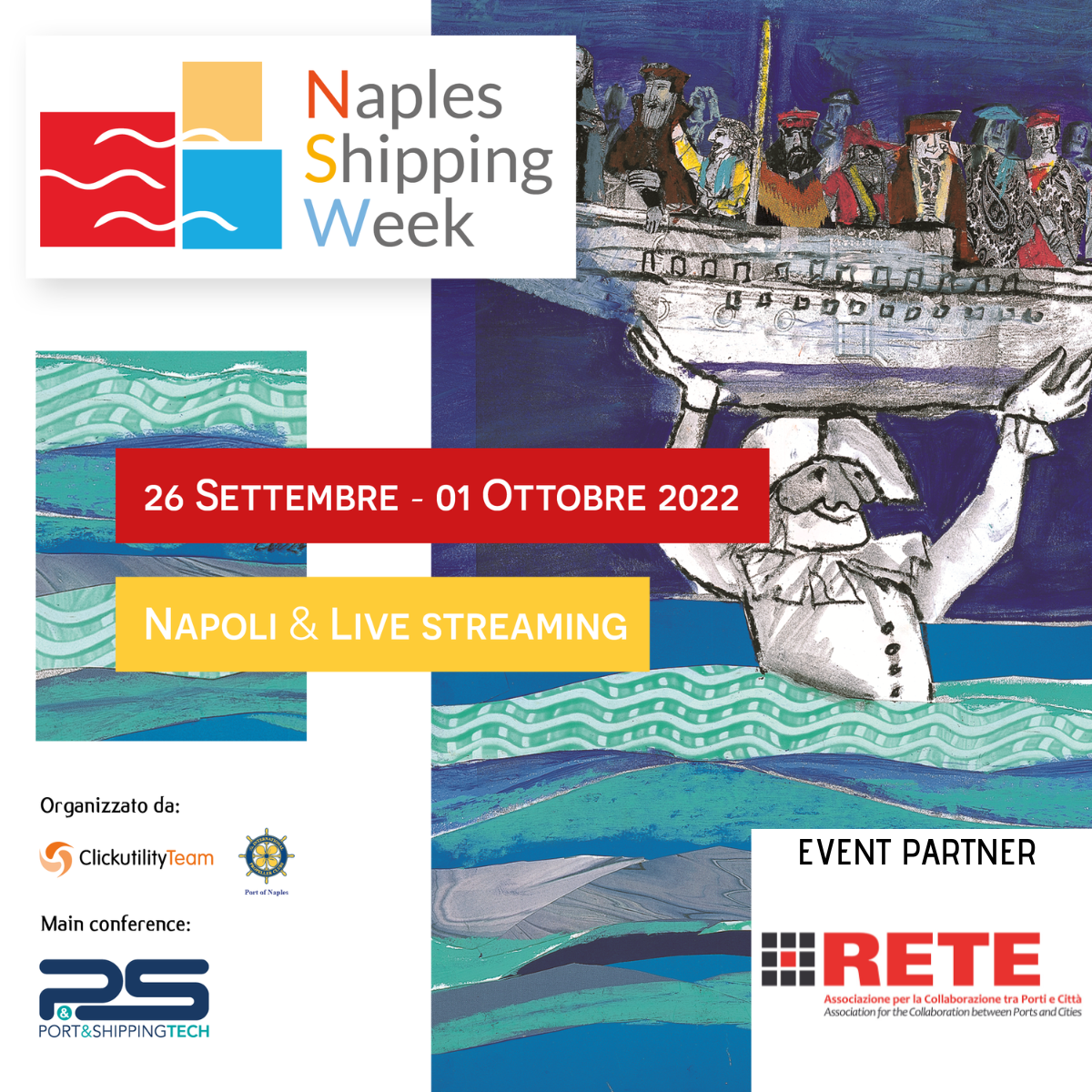 After the success of the 2021 edition of Genoa Shipping Week, Naples is taking over the baton of the international week of shipping and sea culture, with the same organisational team – led by the Propeller Club Port of Naples and ClickutilityTeam – involving local, national and international partners, both public and private, as always.

The relevance of the event, of which RETE is once again a strategic partner, is witnessed by the participation of eminent personalities from the international maritime community, including Kitack Lim, Secretary General of the IMO – International Maritime Organisation, Emanuele Grimaldi, President of the International Chamber of Shipping, Joan Ribó i Canut, Mayor of València, and other mayors of important international port cities.

The fifth edition of the Naples Shipping Week (https://www.nsweek.com) will kick off on the morning of 26 September with the conference ‘The Sea and the City 5.0. Towards a shared planning of the port-city-coast-sea system’, organised by CNR IRISS and the Propeller Club, with the participation of the Port Authority of the Central Tyrrhenian Sea, the Master in Sustainable Planning and Design of Port Areas of the University of Naples Federico II, aniai Campania, and RETE – the International Association for the Collaboration between Ports and Cities.

In the context of the Naples Shipping Week 2022, the research group in Urban Planning of CNR IRISS, coordinated by Massimo Clemente, director of the Research Institute on Innovation and Services for Development of the National Research Council of Italy and director of the Scientific Committee of RETE, is committed to developing the themes of sustainable development of coastal urban areas through the valorisation of the city’s maritime culture, as representation of the collective memory. The research path is strongly rooted in the Institute’s study activities as well as in the history of the Naples Shipping Week.

The conference “The Sea and the City 5.0”, marking the beginning of the NSW 2022, will be opened by the keynote speech of Kitack Lim, Secretary General of the IMO – International Maritime Organisation, who also reconfirmed its participation in the fifth edition of Naples Shipping Week. The debate will continue with a discussion between the Mayors of national and international port cities, including Gaetano Manfredi, Mayor of the Municipality and Metropolitan City of Naples; Joan Ribó i Canut, Mayor of València; Marko Filipović, Mayor of Rijeka*; Luca Salvetti, Mayor of Livorno; Anna Maria Cisint, Mayor of Monfalcone*; Marco Bucci, Mayor of Genoa; Michele de Pascale, Mayor of Ravenna; and Roberto La Galla, Mayor of Palermo*.

The second part of the day will be devoted to deepening the interdependencies between “The Sea and the Coast” and “The Port and the City” through discussions between experts from different disciplines such as law, management, economics, engineering, marine biology, urban planning, valuation, and community psychology.

On the afternoon of 26 September, at 5.00 pm at the Stazione Zoologica Anton Dohrn in Naples, a meeting will be held on Molo San Vincenzo as a strategic resource for the city, organised by CNR IRISS, Propeller Club, Stazione Zoologica Anton Dohrn, Università Giustino Fortunato and RETE. Following the signing of the agreement last 28 June between the City of Naples, the Italian Navy, and the AdSP of the Central Tyrrhenian Sea, a protocol is being implemented to gradually return the Molo to citizens, first through heritage walks and then through the creation of a dedicated pathway, made possible thanks to a funding of around EUR 6 million.

There will be many new features at this edition of Naples Shipping Week, first of all that the NSW2022 will host two international events. BIC – Bureau International Containers has in fact announced that the world convention of the National Registration Organisations will be held in Italy, in Naples, for the first time. This event, held every two years, brings together all the bodies federated in the BIC and dedicated to issuing container markings. Delegates from Russia, China, Vietnam, the United States, Brazil, Central and South America will discuss with their European colleagues solutions to the problems of intermodal transport, tracking, seals and rules on container dimensions and weights. The conference, organised by the Centro Internazionale Studi Containers (C.I.S.Co.), the National Registration Organisation of reference in Italy, will be open, by invitation, to all players wishing to address the problems associated with the development of intermodal transport across world borders.

Geopolitics, sustainability, technological innovation, finance and the human factor will be the macro-themes addressed by the 14th edition of Port&ShippingTech(https://www.nsweek.com/programma-pst2022/), the International Forum dedicated to technological innovations for the development of the logistics and maritime system, NSW Main Conference, which will take place at the Maritime Station Conference Centre, in presence and live streaming, from 28 to 30 September 2022. Three days animated by meetings, debates and updates on the most topical issues of the sector that will involve the main stakeholders of the Italian maritime cluster in a constant dialogue with Europe and the Mediterranean.

Among the topics discussed:

The National Railway Museum of Pietrarsa on Friday 30 September will be the setting for the Dinner on the Gulf of Naples along the rails of the future, the flagship event of Naples Shipping Week 2022.

Closing Naples Shipping Week 2022 will be the conference “The Sea and the Water of Neapolis. Heritage Community Network for a diffused and shared museum” that will take place at the National Archaeological Museum of Naples (MANN). The conference, organised by CNR IRISS, The International Propeller Clubs and MANN, is intended as an opportunity to present the research project focusing on the enhancement of the city’s “fresh water” and “salt water” routes through the construction of a diffuse and shared museum, linking cultural sites related to the sea and water of Neapolis.

The entire programme of Naples Shipping Week is available on the initiative’s website at the following link: https://www.nsweek.com/agenda-nsw22/